I like having Logistic units for my Wargames Armies.  They may not get a lot of use but come in handy for some scenarios.  The British Army used a half battalion of Highlanders to guard their baggage train at both Prestonpans and Culloden.  The Battle of Clifton was fought as a delaying action to give the Jacobites time to withdraw their artillery and logistic train over the hills.

In most 18th and 19th Century Armies, logistics were organised by commissaries.  The post of Commissary-General was normally a civilian or semi-civilian one.  However the Jacobite Commissary-General, Colonel Lachlan MacLachlan, was very much a soldier, and died at the end of Culloden, leading his clan in a charge.  Here is my model of him.  He is a highly converted Strelets Napoleonic British Light Dragoon.

I welded his Tarleton helmet into a Scots bonnet, added a welded plaid, added high tops to his boots and modified the horse furniture.  Here is the original model after conversion, but before painting.

Christopher Duffy, in his “Fight for a Throne” says that the Jacobite baggage train was 60 carts.  They originally used 4 wheel wagons, similar to those which I have modelled for my British Army, but had difficulty crossing the hills on the Scottish/English borders, so switched to 2 wheel carts. 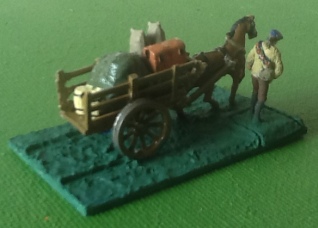 You can see a completed 2 Wheel Cart here.  The mound of baggage is welded sprue, the chest and bags of supplies are from the Airfix Wagon Train set, and the barrels at the rear (perhaps containing whisky) are cut from Airfix AWI American figures (the figures used as French walking drivers).  The horse is from an Airfix Wagon Train set (because I bought 24 loose ones recently).

I also made two Jacobite Ammunition Carts, one for boxes of cannon balls and one for barrels of gunpowder, exactly like those for my British Army, apart from again having Airfix Wagon Train horses.  The walking drivers on all of these carts are just slotted in so can be changed if the carts are needed for a different army, or are captured.

To help to get the Artillery and Baggage Train over the rough border roads, the Duke of Perth formed a Pioneer Corps of 50 men from his own Regiment.  They were decked out with a white sash and a white cockade, and they worked with pickaxe and spade (quote from Fight for a Throne – by Christopher Duffy).   I presume that the white sash was a way of indicating that these were not just labourers, but elite soldiers with a status like French Infantry Sapeurs or British Infantry Pioneers. 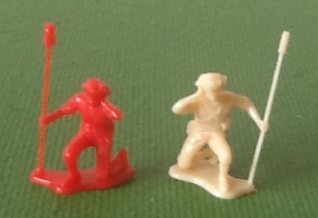 I decided to model two figures to represent these.  The figures I used were both IMEX AWI Artillerymen, one British and one American.  Here they are before conversion.  I cut the rear legs free, and straightened the figures up until they were crouching.

Here they are painted.  Their tricornes have been welded into Scots bonnets, they have a welded tartan plaid added and a welded broadsword added.  The pick and shovel handles are sections of wire hairgrips.  The pick head and spade are welded plastic.  I assumed that their white sash was around their waist, since a shoulder one would get in the way of their work.

Here is the complete logistic train, accompanied by an escort of the Duke of Perth’s Regiment.  Captain de Johnstone recorded (in his Memoirs of Chevalier de Johnstone) that his company and three others were assigned to the task of escorting the artillery and baggage train.  I have shown this escort as four figures, two in front of the convoy and two at the rear.  Immediately behind the leading escort come the two pioneers, followed by the Commissary- General, then two Ammunition Carts and two Supply Carts.

In “Fight for a Throne”, Christopher Duffy records that the Jacobite Army was accompanied by droves of black cattle and sheep.  I thought that I would also model this.

Here are my Highland black cattle, accompanied by a drover.  The cattle are Atlantic Stampede figures.

The drover is a converted Italeri Napoleonic British Highlander, with musket removed, headdress welded into Scots bonnet, a welded plaid added and a welded whip added.  I find that I can make such whips by attaching a blob of sprue to the hand, then stretching it out as I heat it.

I also made a flock of sheep accompanied by a Lowland shepherd and his sheepdog.  I painted the sheepdog like a border collie.  That breed did not really exist until the end of the 19th Century, but is was based on a refinement of existing Scottish Border sheepdogs, so it is reasonable to think that they looked pretty much the same.  The sheep and sheepdog are from the Airfix Farm Set. 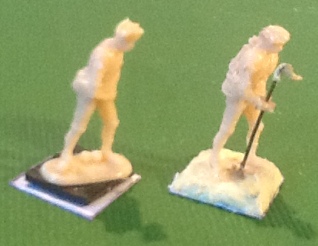 The shepherd is a converted IMEX AWI American Artilleryman, exactly the same figures as I used for my walking drivers, but with a shepherd’s crook (Scottish cromach) added.

I am not sure how I would use herds of cattle or flocks of sheep in a wargame, but Armies of many periods, from the Roman Era, through to the Napoleonic Wars, were accompanied by herds of cattle to provide food “on the hoof”.  Since my drover (and shepherd) just slot into the larger cattle or sheep bases then the same cattle could be used in many periods, with different drovers.