I decided to model the Battle of Clifton (or as some would call it the Skirmish of Clifton).  To set the scene, I will start with some slides from my PowerPoint talk on “The 45” which should be finished later this year, and I will give to raise funds for the British Military Charity “Combat Stress”.

In November 1745 the Jacobites marched into England, down the West coast through Carlisle and moving too fast to be caught by Wade’s Northern Army on the East coast.   Their intention was to head for London and they expected English Jacobites to join them.  A few did in Manchester, but in insignificant numbers. Cumberland’s Midlands Army was positioned to block them just North of Coventry, but Lord George Murray took some of his force on a diversionary move towards Wales, where there was some Jacobite support.  Cumberland marched towards Wales, but Murray swung back to rejoin the main Jacobite Army. 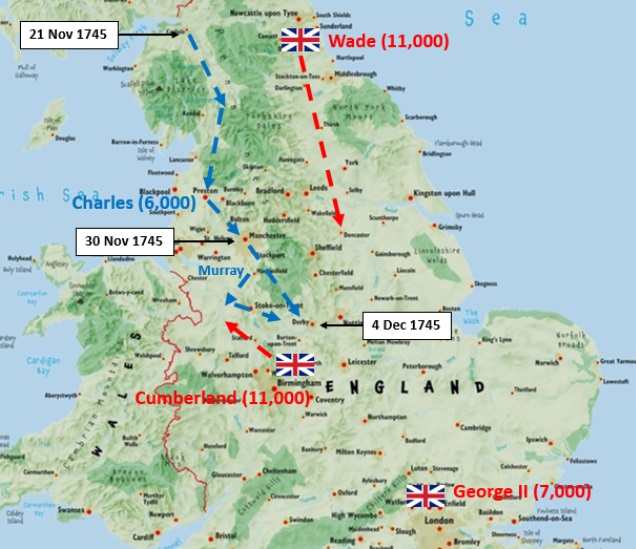 END_OF_DOCUMENT_TOKEN_TO_BE_REPLACED

In my recent posts I described how I created British Siege Artillery.  This was only used once during the Jacobite Rebellion, at the Second Siege of Carlisle in 1745  The Jacobites had left a garrison in Carlisle when they retreated over the border back to Scotland and Cumberland brought up six 18 Pounders to besiege it from 21st to 30th December 1745. 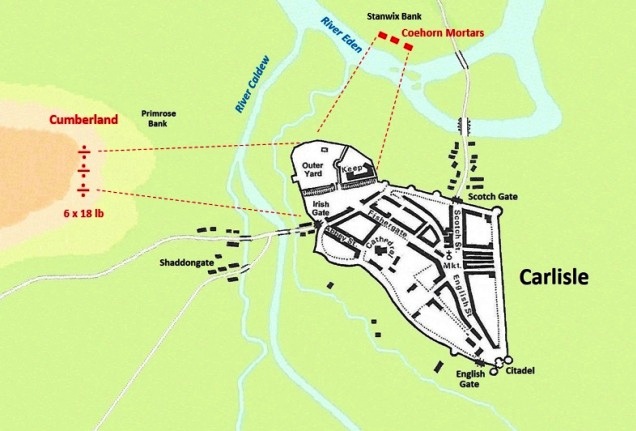 END_OF_DOCUMENT_TOKEN_TO_BE_REPLACED

Having made my British siege guns and mortars, I wanted to make some emplacements for them.  I had already made some as part of my siege works, as described in this earlier post on Siege Artillery, but felt that I needed something less elaborate for use in a less formal siege.  I had two sets of Italeri Battlefield Accessories, each of which contained a pair of gun emplacements, of slightly different designs, so I thought I would use these.

END_OF_DOCUMENT_TOKEN_TO_BE_REPLACED

I had already made four 18 pounder siege artillery guns and four heavy 13″ mortars, to use in my siege works.  You can read here about how these were made.  However I had not made any means to transport these, nor had I made dedicated artillery crews for these, so now I have done so.

END_OF_DOCUMENT_TOKEN_TO_BE_REPLACED

In my last post I described how the Jacobites captured Fort George at Inverness in February 1746.  They then moved south to besiege Fort Augustus, which was at the southern end of Loch Ness.  This was a “modern” Vauban style fortress, with four bastions, but it suffered from a couple of fundamental flaws in its design.  Here is an old print of it. 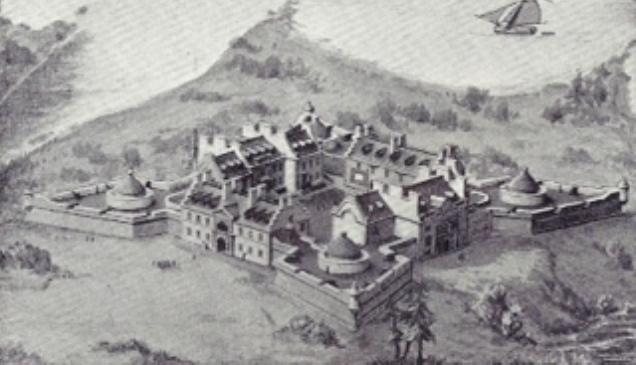 END_OF_DOCUMENT_TOKEN_TO_BE_REPLACED

The “modern” Fort George is a Vauban style fortification to the north of Inverness, but this was built after the Jacobite Rebellion.  In 1746, Fort George was the name given to the old medieval castle guarding the bridge to the south of Inverness.  I decided I needed a Medieval castle to represent this, and explained how I created it in my last post.

The castle reverted to its original name of Inverness Castle after the Jacobite Rebellion and was considerably expanded in the 19th Century.  However I found an old print of it in 1746 and realised that at that time it was mainly a keep plus curtain walls extending out along the banks of the River Ness towards the town. 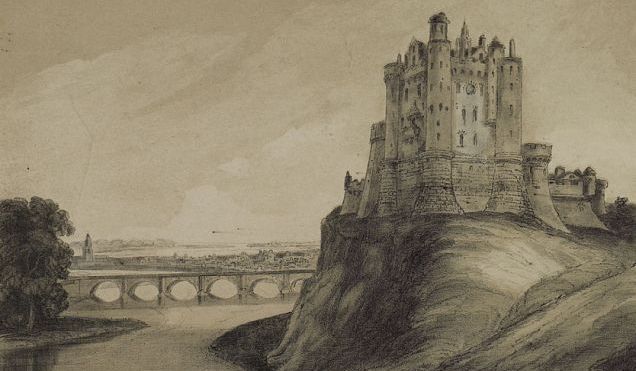 All of the 19th Century extensions were built on the ground in front of the castle from this view.

END_OF_DOCUMENT_TOKEN_TO_BE_REPLACED

The Jacobites conducted several sieges, but were hampered by the lack of suitable artillery.  This was partially solved by the landing of some heavier French guns in November 1745.  These comprised 2 x 8 pounders, 2 x 12 pounders and 2 x 16 pounders.  I decided to model these on my standard 18th Century ratio of one model per two real guns, so just one of each calibre.  I use different manufacturers models to portray guns of different calibres and mix up carriages and tubes (gun barrels) to suit as shown below:

END_OF_DOCUMENT_TOKEN_TO_BE_REPLACED

I decided to model a 6 Pounder battery of three models guns, representing six real ones.  As mentioned in my article on 18th Century Artillery, I have used model guns from different manufacturers to represent various calibres.  In the Napoleonic era most nations simplified their gun carriages to a smaller number of sizes, each of which could be used for a range of  calibres.  However, in the 18th Century virtually every increase in calibre was accompanied by a larger gun carriage.

END_OF_DOCUMENT_TOKEN_TO_BE_REPLACED

The article was originally drafted over 20 years ago as part of a book which I never finished.  There is much better research on Napoleonic Artillery available now, such as books by Kevin Kiley, Anthony Dawson, Paul Dawson and Stephen Summerfield.  However, having published articles on my similar old research into Infantry and Cavalry, I thought that I would add this one for completeness.

Well, I have finally finished my Jacobite Field Artillery.  Their guns were either captured British ones or provided by the French.  The Gunners themselves were lowlanders, mainly recruited from the Duke of Perth’s Regiment, with a small number of French Artillery providing command and technical direction.  Here is a typical detachment of two model guns (representing four real guns).  These guns are British 3 pounders (IMEX AWI American guns), the Jacobite crewmen are conversions from that same set, whilst the French Gunner is a conversion from a Strelets Russian Artillery of Peter I set. 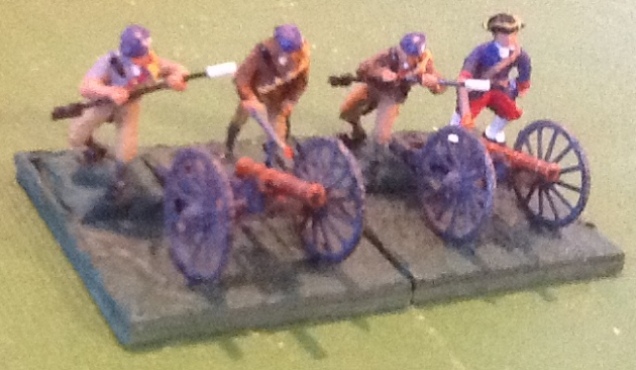