Back in 1966, 50 years ago as I write this, I was posted to Germany for the first time, based in Hameln on the Weser.  I was due to return to UK at the end of the year and planned to get married at that time.

Since my fiancée and I were saving up, I decided to spend some of my free time creating an Agincourt set-up, rather than prop up the bar every night.  All of the figures are Airfix Sheriff of Nottingham and Robin Hood sets, but heavily modified by plastic welding.  The mounted knights in particular have all had plastic trappings made for the horses.

The English and French Armies which I created were each based on six rather non-historical Battles (contingents), headed up by a nobleman, accompanied by a standard bearer and hornist (English) or drummer (French). The English Battles had 24 figures, plus the three command figures, including half archers in each Battle, whilst the French had 28 figures (plus the three command figures) but including only four crossbowmen per Battle.  There were more armoured men-at-arms in the French Battles.  The French also had more cavalry than the English.  All of the coats of arms are historically accurate, but ordinary men-at-arms would not have had the full coat of arms on their surcoats, as I modelled them (not knowing any better at the time).

Recently, my seven year old grandson had got interested in these and likes to play with them on my wargame table when he visits.  I therefore finished them off with some Medieval artillery (which I had always meant to do, but had not previously got round to), and did a bit of repainting of chipped items (there was not much). I also rebased some of them so that they were all on single bases (most already were), since my grandson wanted it that way.  I also made some bases of protective stakes for the archers.

Pictures of some of these are below:

Here is a typical English Battle (contingent), that of the Earl of Oxford.  Most of the infantry are on bases 15mm wide x 20mm deep, but the archers, and French crossbowmen are on bases 20mm x 20mm.  The mounted figures are all on 20mm x 40mm bases.  The flag is a piece of hand painted plastic.  The hornist (hidden behind the Earl) is a converted Airfix ACW Union bugler.

Here is the sole English cannon which I made.  The oxen are actually plastic bulls, which the Spanish Torres wine company used to attach to the necks of their bottles of Sangre de Toro (Bulls Blood) red wine.  I have over 50 of these bulls, such sacrifices for my model soldiers, particularly since my wife does not drink red wine!!!  The artillerymen are on 20mm square bases.  There is a walking ox-cart driver. 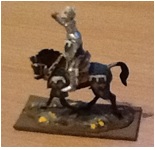 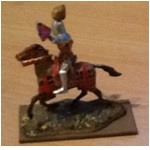 Here is a typical French Battle (contingent), that of the Duc de Bourbon.  The drummer is a converted Airfix ACW infantryman (the drum being a piece of sprue).  The French crossbow men are converted from archers, with a piece of plastic cut to resemble a crossbow, then a cut off section of curved staple pushed through it.

I made a pair of cannon for my French, both larger calibres than the English one.  They are all scratch built, as are the carts which they travel on.  The solid wheels of the carts are buttons, with a hub welded on, and two strips of card stuck either side of the hub, to look like typical reinforcing of such wheels.

Here is a scene from a typical wargame set-up, with four French Battles, led by a mass of armoured knights, charging towards the English, who have only two Battles and a few mounted knights.  It is a bit hazy, so I clearly need to improve my photography technique.

Slightly better shot from the French left.  You can see the protective stakes in front of the English archers.  They are made from toothpicks stuck into cork tile bases.  I used a miniature electric drill to make angled holes in the bases, before gluing the toothpicks in place.

Similar shot from the French right.  I painted all of my English with green bases and all of my French with earth coloured bases, so as to easily distinguish between them.  Airfix did not make mounted knights with lances, so I modelled some with softened sprue, tapering as it is pulled out.

I have played very few games with these figures, but those that I did, many years ago were with WRG (Wargame Research Group) 5th Edition Rules.  I suspect they would be perfectly suitable for Warhammer Ancient Battles Rules.

I did produce some very simple rules to get my grandson interested in the concept of measuring movement and deciding casualties with dice but, at the age of seven, he is not ready for such advanced concepts yet.   However, for what it is worth, here they are: 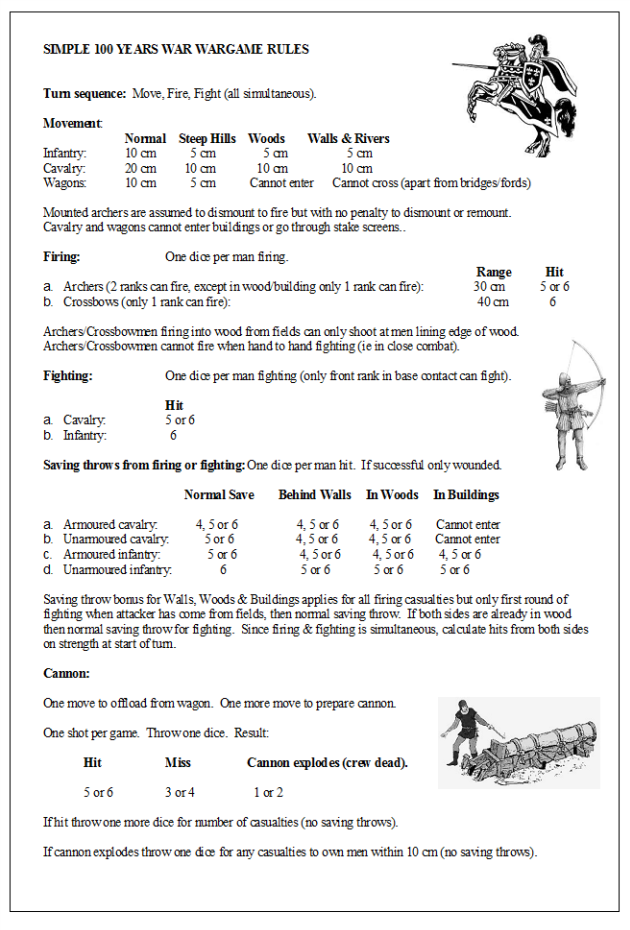