A few years ago I purchased a 15mm PaperTerrain Vauban fortress, and two years ago finally got around to making it up.  I made it in modular sections, essentially as it was designed to be but with a few modifications.  All of the modular sections are mounted on cork tile bases for extra strength.

The Bastions originally looked like this.  The walls are hollow card, but I reinforced the central platform with a polystyrene block below it, cut to the exact same shape.  I added gun platforms to them, by finding a suitable image of timber planks on-line, printing these off, wrapping them around card squares and gluing them in place.

These were not just for effect, but actually needed so that my Hät fortress guns (from their Royal Navy and Marines set) could be positioned high enough to fire through the gun embrasures.  The fortress gun barrels are Airfix Napoleonic French Artillery, and represent short 12 pounders.  The artillerymen are IMEX AWI Americans, painted as 18th Century RA.

I modified all of the Curtain Wall sections to make them deep enough for my 18th Century infantry, which are mounted on 20mm deep bases.  PaperTerrain do sell a kit for this, but I just extended the walkway myself, and then had to shape the end sections of the Curtain Walls to fit the Bastions.  Again the wall is hollow, but the walkway is reinforced with polystyrene.

I also made one breached Curtain Wall section.  In this case I reinforced the whole of the wall with polystyrene, cut a section out of it, spread PVA glue over it, sprinkled gravel chippings on top and added a bit more thinned PVA glue to hold all the chippings in place. 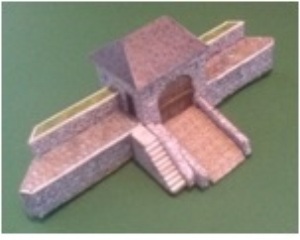 I also needed to modify the Gatehouse Wall section.  The original PaperTerrain model had the entrance at ground level, but I wanted to lift this up, so that I could build my Glacis in the way which I wanted to.  I therefore modified it, with a ramp on the inside.

The fortress Gatehouse now has a bridge to a Demi-Lune, where the roadway then turns through an angle, then continues via a second bridge to the top of the Glacis.  The Glacis slope is gentle enough for a road to run down it.

PaperTerrain do sell card Glacis, but I felt that they were at too steep an angle.  I therefore made my own modular system of these, to surround the fortress.  The completed model is shown here, with a baggage train vehicle, escorted by a contingent of 64th Foot (Highlanders), approaching the gate along the road.

Having modelled a Vauban fortress, I am currently working on a modular range of scratch built Siege Works.  It should be complete in a few weeks time and I will post a progress report on this on my Blog.  Meanwhile, here is a picture of a section of these, a parallel under construction.  Those infantry “sappers” need to dig a bit harder to get it finished.

I have plans to make a small Vauban style fort to represent those at Fort George, Fort Augustus and Fort William during the Jacobite Rebellion.   The Jacobites captured the first two, but the third one held out.  In fact, they were not identical in style, but for wargame purposes a small generic one would be satisfactory to me.  I thought I would make this with normal sized Bastions, but half length Curtain Walls (with no Demi-Lune or Ravelins), which should make it quarter sized, compared to the full sized fortress above.

I have plans to make a modular Medieval Castle, many of which were still in Spain during the Peninsular War (and many still are today).  Sometimes Medieval castles and Vauban fortesses were combined, as at Badajoz.  There are a couple of free castle downloads on-line which look suitable.  Alternatively I could purchase an Usborne card model of one.

I am always fascinated by the attack by Lord Murray against Blair Atholl Castle (his own family home) in 1745.  Christopher Duffy wrote an excellent account of it in his “Best of Enemies” book, focusing on the rather half-hearted activities of the Hessian Contingent.  I thought of re-fighting this as a “what if” campaign, including if the Hessians had attempted to push north from Dunkeld into a second Battle of Killiekrankie (in fact they were fearful of doing so, fuelled by accounts of the 1689 battle).  I therefore wanted models of Blair Atholl Castle and the adjacent outpost of Menzies Castle.

I looked on-line for Scottish Castle models, and found a French card one of Craigievar Castle, which looks similar to Menzies Castle.  I ordered one, but it was only about half the scale I needed and had no back.  I enlarged a copy, printed it out and modelled a back.  I then made this up, including a ruined version on the base, which the full version fits over.  I think it is a good enough match for Menzies Castle, however I do wonder whether I have made it too big, effectively in scale with my 1:72 (23mm) figures, rather than the reduced 15mm scale which I normally use for buildings.  It was a lot of work to make it, so I will just stick with it as it is.  Here is a photo of it, with some of the 27th Foot (Inniskilling’s) who defended it.

I had more of a problem with Blair Atholl Castle.  The castle was in the middle of being extended during the Jacobite Rebellion, completely restructured after that, and even more changed during the Victorian era.  Fortunately there are illustrations of the front and back of the castle as it was in 1745 in Christopher Duffy’s excellent book, and I also found an on-line floor plan of the castle, as it was in 1745.  By combining these I managed to build a model of the castle as it was in 1745, together with a ruined base version.  This is not so tall as the “Menzies” Castle above, so I think it is closer to a true 15mm scale.  In front are some of the 21st Foot (Royal Scots Fusiliers) who defended it.

I had thought of building a model of Stirling Castle, perhaps a bit cut down from my normal 1:15 scale for buildings.  The Jacobites besieged Edinburgh Castle, with no hope of success, since they had no siege artillery at that stage.   However they did have some French siege artillery by the time they besieged Stirling Castle, but the useless Mirabelle de Gordon mishandled it.  Perhaps if the competent Colonel Grant had been commanding the Jacobite siege artillery at that time, there would have been more success, but Sirling Castle is an impressive fortification.  I cannot find a model of one on-line, but have found pictures of other plans and scratch built models of the castle, so may have a go at it.

If I ever get around to my Roman set-up, I will model some Roman forts.  I have an Usborne card model of one, not yet assembled, which I would guess is large enough for a complete wargame Legion.  If I make this modular, then I could probably have a smaller Cohort sized one as well.

I would also look at scratch built modular versions of Roman temporary marching camps, both legionary and cohort sized.