I have nearly finished my modular siege works, although I have fallen slightly behind my original schedule due to other distractions (setting up a website for a Veterans’ Association).  My siege works should now be finished by late November.

Once it is completed, I plan to show a whole siege.  My only 18th Century figures are British and Jacobite, and there were no sieges involving major trench works during that campaign.

I have therefore decided to base my siege demonstration on the Napoleonic era.  However I had no suitable siege engineers, so I have now made some British Napoleonic ones.  This is Lieutenant Colonel Sir Richard Fletcher, who commanded Wellington’s Engineers at most of the Peninsular War sieges.  He has a map, as do all of my engineer officers, and is pointing out work to be done.

END_OF_DOCUMENT_TOKEN_TO_BE_REPLACED

My current project of creating modular Siege Works will be finished in about two weeks, and I will set up the whole system to show a siege after that.  There is not much more to say about it until then.  Meanwhile, to fill the gap in blog posts, I have been updating some of the Pages in the Military History Section of the website.

I have now updated this paper and readers of this blog might be interested in my conclusions.   END_OF_DOCUMENT_TOKEN_TO_BE_REPLACED

As readers of my blogs will be aware, my current project is a scratch built modular system of Siege Works.  I covered the principles behind this in my earlier blog Siege Works.  I have now completed the first of my siege gun and mortar batteries, so thought I would describe how I did this.

My British Siege guns are made from the longer gun barrels from the Hät Sailors and Marines set, mounted on carriages from the Italeri French Guard Artillery set.  They represent 18 or 24 pounders, and I will use them both for the 18th Century and Napoleonic eras.

END_OF_DOCUMENT_TOKEN_TO_BE_REPLACED

A couple of years ago, I made up a PaperTerrain model of a Vauban fortress.  This is suitable for both the 18th Century and Napoleonic era.  You can see more details of this on my Fortifications page. 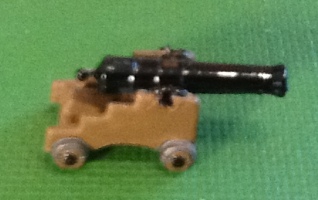 I needed some artillery for this, and the only suitable garrison carriages were those of the Hät British Sailors and Marines set.  However I thought that the gun barrels themselves were too large for fortress artillery, so I used Airfix French Napoleonic Artillery barrels instead, and assumed that they were short 12 pounders.   I painted the gun barrels black to represent iron guns. END_OF_DOCUMENT_TOKEN_TO_BE_REPLACED

I was looking at my top menu pages to correct spelling mistakes (I noticed a few) and realised that I only had one picture of Napoleonic Spanish Infantry, despite having 22 battalions of them, representing all of the Spanish units at Albuera.

I decided to correct this, both on the main Napoleonic Infantry page and also via this blog post.  Here is the 4th Battalion Reales Gardes.  They have been converted from Esci 1806 Prussians.  The grenadiers are headswaps with Airix French Imperial Guard Grenadiers, enabling the French Imperial Guard 3rd and 4th battalions to have some men in bicornes. END_OF_DOCUMENT_TOKEN_TO_BE_REPLACED

My current project is modelling a modular set of siege works, based on illustrations in Christopher Duffy’s book “Fire & Stone – the Science of Fortress Warfare 1660-1860”.  These siege works are entirely scratch built, and I thought I would describe the technique in this blog.  Here you can see a sap, running away from a parallel, through a couple of zig-zags, and a pair of 18th Century British Infantry sappers working on the sap head, with a British Engineer Officer looking on. END_OF_DOCUMENT_TOKEN_TO_BE_REPLACED

As mentioned elsewhere on the website, I have a model of a modular Vauban fortress (card model from Paper Terrain), which can be seen on the Fortifications page.  I have created a number of alternate flags to fly over this, to show the current ownership. I thought I would write this blog to show how I made them. END_OF_DOCUMENT_TOKEN_TO_BE_REPLACED

Several of my wargame figures can be used in different levels of command, reflecting history.

For example Lord George Murray commanded a Brigade at Prestonpans, but after that commanded the Jacobite Highland Division.  He is shown here as a Brigade Commander, wearing Murray Lord George tartan for his jacket and breeches, with a plaid of Murray of Atholl tartan.  He is an unconverted Strelets Jacobite figure.

When commanding the Highland Division, I want to show him on a Command Sabot accompanied by his ADC, Colonel Kerr of Graden.

END_OF_DOCUMENT_TOKEN_TO_BE_REPLACED

For many years I have stored my figures in A4 sized Filing Boxes.  I make sure that I buy ones which do not have holes in them (as some do to facilitate taking them off shelves).  These are cheap ones which I bought in packs at the UK Stationery store, Staples. END_OF_DOCUMENT_TOKEN_TO_BE_REPLACED

I have created a new Sidebar Widget for Categories.  Every blog which I have posted so far is in Website General, but as time goes by there will be other categories such as 18th Century, Napoleonic, Terrain etc.  These categories of course refer to current and future blog posts and are entirely separate to the Top Menu pages, which give a lot of detail of my wargaming, modelling and Military Historical Research over more than 50 years.