A couple of years ago, I made up a PaperTerrain model of a Vauban fortress.  This is suitable for both the 18th Century and Napoleonic era.  You can see more details of this on my Fortifications page.

I needed some artillery for this, and the only suitable garrison carriages were those of the Hät British Sailors and Marines set.  However I thought that the gun barrels themselves were too large for fortress artillery, so I used Airfix French Napoleonic Artillery barrels instead, and assumed that they were short 12 pounders.   I painted the gun barrels black to represent iron guns.

I originally made 16 of these, one for each of the four embrasures in each bastion of the fortress.  However I have since read that some of the smaller forts used swivel guns as well, so I decided to model some of them.  Swivel guns were very small calibre pieces, perhaps ¾ pounders, used to fire grapeshot at close range attackers.  They were particularly useful to fire from a bastion across the front of the adjacent curtain wall.

My swivel guns were scratch built, apart from the gun barrel itself.  The base is weighted and the upright is a triangular section piece of sprue.  The gun mount is welded plastic sprue.  The tiny gun actually is a swivel gun from the Airfix 1:87 HMS Bounty kit (I thought I might convert that ship to use for amphibious landings one day).

I modified the PaperTerrain bastions to add gun platforms.  These were not just for effect, but actually needed so that my Hät fortress guns could be positioned high enough to fire through the gun embrasures.  I found a suitable image of timber planks on-line, and made this into a 25mm square gun platform shape, with bits on the sides to wrap around pieces of thick card. 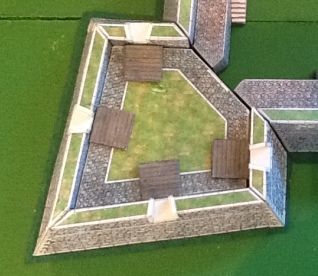 I then printed these off, wrapped them around the card squares and glued them into place on the bastions.

Fortresses had a variety of other artillery.  Christopher Duffy’s “Fight for a Throne” lists the artillery in Fort William in 1745.  The largest guns were 12 lb garrison guns but there were also 6 lb guns and “smaller pieces” (possibly swivel guns).  The inventory also included an 18 lb siege mortar and several smaller coehorn mortars.  Since I have models of all of these mortars I thought I would show them here.

The smallest are the Coehorn Mortars, converted from barrels of Hät Napoleonic Prussian howitzers.  The slightly larger Royal Mortars have barrels from Italeri French Guard howitzers.  The largest is the 18″ Siege Mortar.  All of the mortar beds are weighted to give them more stability.

The beds for the Coehorn Mortars and Royal Mortars come from a set of OO/HO model railway parcels, originally made by Wills, now part of Peco.  The 18″ Mortar barrel comes from that same set of parcels.  Its bed is scratch built.  I will post more about how I made that mortar when I write a blog on siege artillery.

One thought on “Fortress Artillery”