I was looking at my top menu pages to correct spelling mistakes (I noticed a few) and realised that I only had one picture of Napoleonic Spanish Infantry, despite having 22 battalions of them, representing all of the Spanish units at Albuera.

I decided to correct this, both on the main Napoleonic Infantry page and also via this blog post.  Here is the 4th Battalion Reales Gardes.  They have been converted from Esci 1806 Prussians.  The grenadiers are headswaps with Airix French Imperial Guard Grenadiers, enabling the French Imperial Guard 3rd and 4th battalions to have some men in bicornes.

I picked the Albuera Orbat for my Spanish Army since it was at a period when the Spanish had reorganised to a French structure of each battalion comprising four centre companies, one grenadier company and a light company.

I have also visited Albuera, with Nick Lipscombe (the author of The Peninsular War Atlas) as our guide, and stood exactly where Zayas’ Division stopped the French attack.   Actually at that stage Zayas only had one Brigade in line to fend off two complete French Divisions, attacking in columns, but he was brilliantly successful, and his stubborn defence was a turning point in the battle.

It was a period of massive change to Spanish uniforms.  A few regiments still had old white uniforms, but most had blue or brown.  There were even some in green (like Regiment de la Patria) and red ( Cazadores de Barbastro).  Furthermore they had a wide variety of headgear, including bicorne hats, bell-topped shakos, conical shakos, top hats and even one regiment in a “bonnet de police”.  Some grenadiers were still wearing their bearskins with long flammes.  This makes a really eclectic and attractive mixture.

Here is the Regiment de la Patria, in their green uniforms.  They are converted from Esci French Line Infantry.

I used two main sources for Spanish uniforms.  The first was Steven Thomas’ excellent website (Steven’s Balagan) showing all of the Spanish Army at Albuera and a tremendous amount of uniform information about them.  My second source was a real find.  I was browing in a second-hand bookshop when I saw a copy of José María Bueno Carrera’s outstanding book “Uniformes Españoles de la Guerra de Independencia”.  Because it was in Spanish the bookseller only wanted £8 for it, so I snapped it up.  It has four pages of coloured schematics of Spanish uniforms and 71 coloured plates of uniforms, many with between 3 to 5 uniforms per page.  My Spanish is good enough to read most of it, but it is pretty easy to follow, even if you speak no Spanish at all. 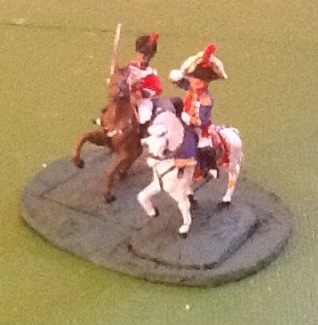 Some uniforms were entirely speculative, like the escort to General Blake shown here.  I followed the description in Judge-Advocate Larpent’s memoirs (page 152) describing Spanish Guides uniformed in scarlet jackets of a British Yeomanry style.  Blake was of Irish ancestry and had served in the Irlanda Regiment.  He is a converted French Airfix infantry officer.  His escort is a converted Airfix British RHA gunner (originally a foot figure, but with legs at an angle that make it easy to convert him to mounted).

Below is a Spanish Brigade, commanded by Brigadier General Carlajan, a converted Esci Polish lancer officer. 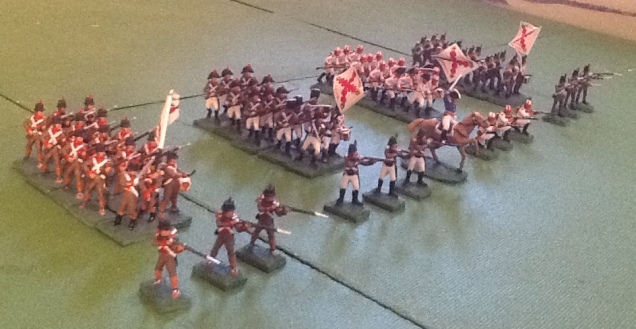 The closest regiment is 1st Battalion Provincial Catelanes.  They are converted Hät British Marines (in their round top hats).  I have painted them with leather gaiters and sandals.

The next regiment is Regiment de Lena.  They are in brown uniforms with bicornes and are converted from Esci 1806 Prussians.

The third regiment is Regiment de Castropol.  I have shown them in white with their distinctive “bonnets de police”, not unlike those worn by the modern Spanish Army.  They are converted from Esci 1806 Austrians (helmet welded into bonnet).  Their officer has a bicorne and their grenadiers have bearskins.

The fourth regiment is the Regiment Cangas de Tineo.  I have shown them in brown uniforms with conical shakos.  They are converted from Hät British Light Infantry.