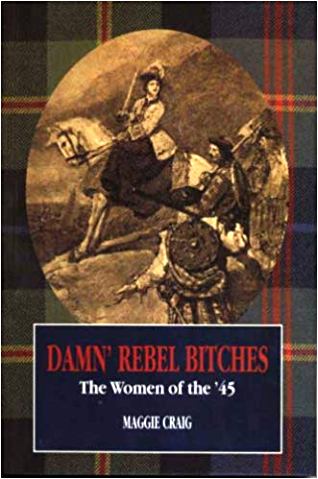 There were a number of feisty ladies who were passionate about the Jacobite cause.  Many of these are described in Maggie Craig’s book “Damn Rebel Bitches”.

Perhaps the most famous of them was Lady Anne MacIntosh.  Born Anne Farquharson, at the age of 20 she married Angus MacIntosh in 1743.  He was Chief of Clan MacIntosh and the Chief of the Clan Chattan federation.  In early 1744 Angus was offered command of one of the 43rd Foot (Black Watch) Additional Companies being recruited in Scotland, whilst the main battalion was overseas in Flanders.  Anne rode around the Clan area and raised 97 of the 100 men needed for the company. 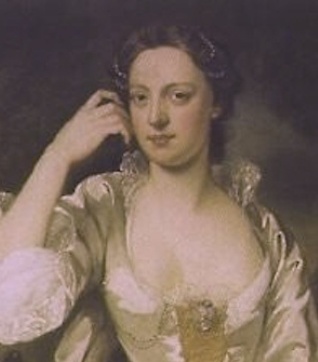 When the Jacobite Rising started, Angus’ company was one of those which accompanied General Cope on his march north, but was then left in Inverness.  He stayed loyal to the oath he had sworn to the Government, but when the Jacobite Army marched south into England, Anne, aged 22  (pictured here) rode around the Clan area again, this time raising a Regiment of 500 men for the Jacobite cause.  Meanwhile her cousin, Francis Farquharson of Montalrie raised a Jacobite Regiment of 250 men. 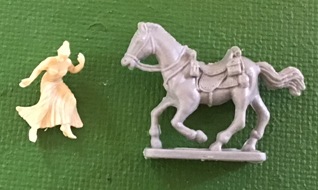 I decided to make a model of Lady Anne.  The female figure was one from the Atlantic Ancient Life set, originally reclining on a couch, and the horse is one of the really cheap Eagle Games ones.

Some accounts say that Lady Anne adopted male clothing during her recruiting episodes, but I decided to model her riding sidesaddle, as in the illustration on the cover of the novel “White Rose Rebel” by Janet Paisley.  The historical events in this novel are accurately portrayed.

I also decided to give the figure a sword and pistol, as described in the novel, although she was not present at any of the main battles.

She was however present, and some say took a leading role, at the Rout of Moy on 16th February 1746, as described in my earlier post here. 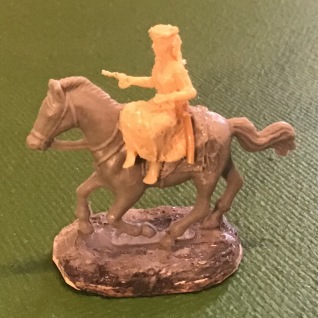 I converted the Atlantic Ancient Life female figure by cutting up the centre of her skirt, changing the position of her legs to be appropriate for riding sidesaddle, then  re-welding her skirt, adding a Scots bonnet, sword and pistol. 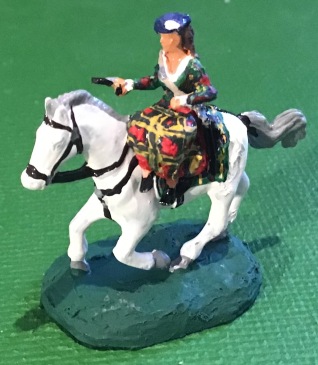 Here is the completed figure.  I gave her a simplified Farquharson tartan jacket with a MacIntosh Chief tartan skirt.

In a wargame I would use her presence at the rear of the Jacobite lines to give her Regiment additional morale.

Angus was captured by the Jacobites at Dornoch Firth and placed in the custody of his wife.  She apparently greeted him by saying “Your servant, Captain”, to which he replied “Your servant, Colonel” in recognition of her role in raising his MacIntosh Clan, and the rest of the Clan Chattan federation, as a Jacobite Regiment.

After Culloden, Anne was captured, threatened with execution, but then released into her husband’s custody.  Amazingly she later attended a ball in London, where the Duke of Cumberland asked her to dance to the pro-Government tune celebrating his victory “Up and waur them a’, Willie”.   She did but then said “I have danced to your tune, now you must dance to mine” and asked the band to play the Jacobite tune “Auld Stuart’s back again”.  Whatever his other faults, Cumberland was too much of a gentleman to refuse.

There are several circumstances of families split loyalties, possibly some deliberate to ensure that whoever won the Clan would survive.  Lord Kilmarnock raised the Jacobite Horse Grenadiers, later dismounted as Kilmarnock’s Foot Guards, whilst two of his sons were serving with the British Army.  The tiny Clan Chisholm Regiment was commanded at Culloden by Roderick Chisholm, who was killed at the battle and his body was recovered by his two brothers, both serving in the Royal Scots in Cumberland’s Army.  Lord George Murray had a son who held a commission in the 64th Foot (Loudoun’s Highlanders), and who was horrified that his father’s Jacobite support had ruined his future.   Lady Anne MacIntosh was certainly a passionate Jacobite.  The degree to which her husband Angus really held opposite convictions cannot be known for sure.